Mahe: the labrador who takes care of his little human

Mahe: the labrador who takes care of his little human 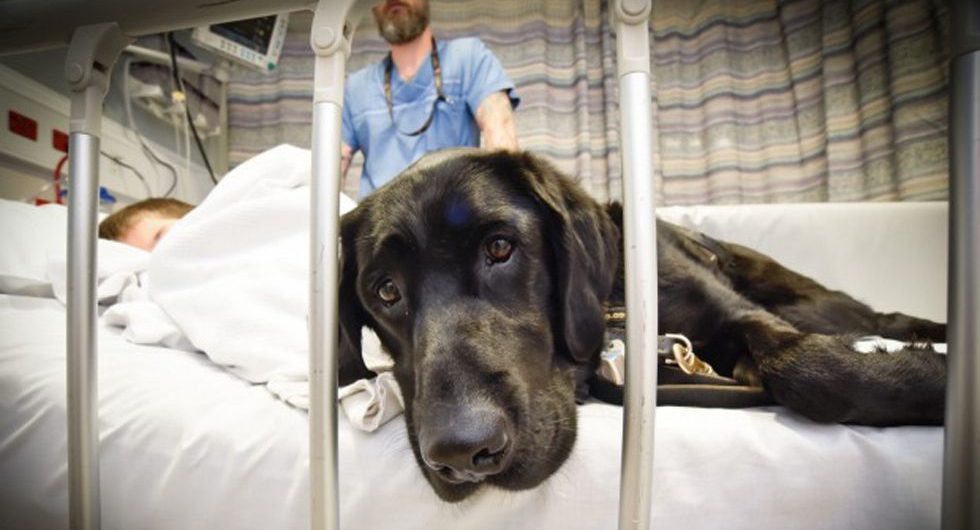 Hi, my name is Mahe, I am a beautiful female Labrador of about three years and of black color. As a puppy I attended for six months there Dogs New Zealand Trust, a dog training school in New Zealand, where they teach us as they say, ad enrich the lives of humans with disabilities and it is called Pet Therapy. Then one day, my human dad and mom decided to adopt me. Upon arriving at my new home, I met James, and we haven't been apart since.

We are more than brothers, he is my best friend, and I am for him, he makes me understand it every time he looks at me, because that's the way it is for him too, we understand each other with the look. We do it all together, and we never part, Dad and Mom always say that since I have been around, not only James's life has changed, but theirs too.

Before, it was forbidden for them to go out with him and have some form of social life, because he always got nervous in the presence of strangers. For them it was also a nightmare to enter a cafe, as soon as they walked through the door James always tried to escape because he didn't feel safe even with them. It fills me with pride and makes me happy when I see that they too are calmer, but I don't do anything exceptional, they are my family, and being next to him makes me happy, especially next to James. My little human doesn't talk much, in fact he doesn't talk to anyone at all, he communicates with me, with mom and dad only with his gaze and physical contact.

Doctors say he's autistic, I don't know what it means, but mom and dad say that since he's been with me, he's calmed down and feels safer especially when he's with those he doesn't know. So when we go for a walk, and they want a coffee, I'm with James on a leash, if he strays too far from them, or gets agitated and tries to escape to a busy street, I sit down and never move, not even if I see a cat pass by, and believe me, for a dog like me it is a great sacrifice to have to do it. Unfortunately for some time now, my friend's seizures have increased, so the doctors decided to have James undergo an MRI to understand why. So the doctors decided to admit James to the hospital, obviously it worried me a little bit, I didn't like the idea of ​​leaving him alone., my little brother needed the security I can give him.

So when the doctors saw how my presence calmed down, they allowed me to be close to him. Unfortunately, we dogs are not allowed to enter the hospital, but for me they made an exception, so I was able to stand next to James when he was given anesthesia. Mommy what anxiety I had when, lying with him in bed, I saw him fall asleep. I was rubbing my muzzle on him to reassure him, and make him understand that I was by his side, I was so afraid, but it was the last thing he needed. Then I had to wait for the end of the resonance outside the room, here Michelle, my mum, was waiting worried while drinking a coffee, and I could not help but give her a little courage too. I know that my mother also understood that I was worried too, because she knows very well that there is a kind of magic that binds us, James is only nine, and it saddens me to see him like that.

With me he feels safe, I always protect him and when I notice the arrival of a crisis, I alert mom and dad with a yelp. He needs my eye contact to calm down and find serenity, but deep down what do you want it to be, they taught me to be his guardian angel and he became my little human.

tags: autistic dog labrador pet therapy
previous postThe arrival of a puppy at home
Next postWith the dog at the dentist, for the little ones it is a boon